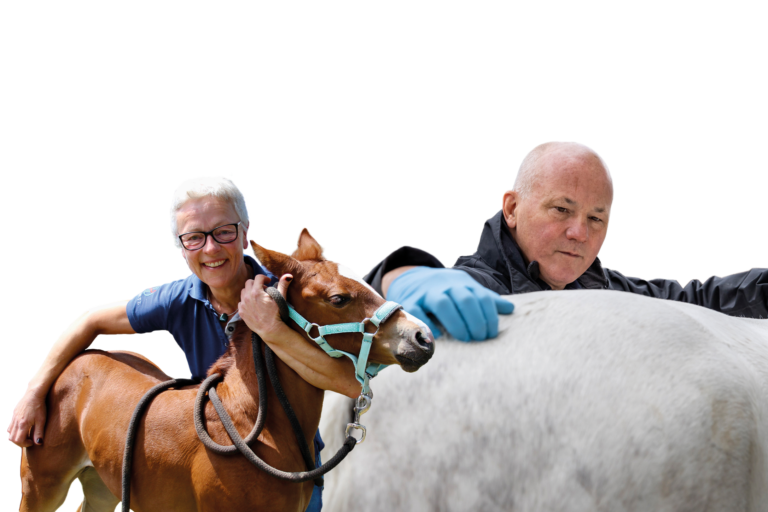 The first mention of Burg Müggenhausen, a castle situated in a small hamlet by the same name in the North Rhine-Westphalian district of Euskirchen, can be found in records from the late 14th century. Today, only a few remnants remain of the former castle, with the moats now reduced to a rather picturesque pond. A manor, now under heritage protection, was built in its place in the 18th century and today is home to the impressive Pferdeklinik Burg Müggenhausen GmbH. Not only is this equine hospital among the most innovative anywhere in Germany, it has also made an international impact over the years by setting new standards in equine medicine – a reputation it maintains to this day. In the late 1990s, for example, the clinic helped to develop a focused shockwave therapy. It has also promoted the development of bioregenerative therapies and adapted IRAP therapy from the realm of human medicine; this treatment has since become globally renowned. In addition, Pferdeklinik Burg Müggenhausen was the third clinic worldwide to introduce a magnetic resonance imaging device for horses and, in 2019, became the first and only equine hospital in Europe to introduce a novel, highly specialist veterinary X-ray device based on tomosynthesis technology with X-radiation.

Dr Thomas Weinberger co-founded the hospital in 1997 and, together with Dr Cordula Gather, remains a director of the limited liability company (GmbH) to this day. Both Weinberger and Gather are specialist veterinarians of international renown. They both also benefited from a blend of domestic and international training and education. Dr Cordula “Coco” Gather, who is also a certified osteotherapist, studied at the University of Veterinary Medicine Hanover and has completed numerous placements, including in the USA. As part of her doctoral study, the former Hannoveraner Verband auction rider also worked with the Celle State Stud breeding facility in Lower Saxony. To this day, gynaecology remains one of Gather’s areas of speciality, alongside orthopaedics and sports medicine. Until the autumn of 2014, Gather – herself a successful dressage and show jumping rider – also mentored the German dressage team at international championships.

Thomas Weinberger, whose specialisms include orthopaedic surgery, sports medicine and ophthalmology, is also something of a globetrotter when it comes to equine medicine. The holder of a Silberner Reitabzeichen, Weinberger was also a keen polo player. He studied in Vienna, Berlin and Munich and completed placements at clinics in locations including Los Angeles and
New York. Even while writing his doctoral thesis on a special ultrasound technique used to examine horses’ hearts – a piece of work that earned him the prestigious Felix Wankel Research Award – he worked as an assistant vet at an equine hospital in Münster. Further assistant roles followed in Bochum and Cologne before he passed the examination to become a specialist veterinarian and, in 1994, set up on his own in Frechen. In 1996 he came across Burg Müggenhausen, which at that time was a former farm building. After significant investment and work to convert the premises, the Pferdeklinik Burg Müggenhausen was founded the following year. Its legal status was changed to a limited liability company in 2006.

In his spare time, the equine specialist and sought-after consultant has long been a judo enthusiast, a keen skier and an even keener traveller. Weinberger is not from what you might call a typical horse-loving family – his father was a lawyer – however, horses caught his eye at a young age. It was at a rural riding association near Cologne within cycling distance of his home that his passion for all things equine was first piqued. This association also gave him his first contact with racing thoroughbreds, which were accommodated at the guest house during the winter months. Though he went on to enjoy success in dressage and show-jumping saddles, his passion for thoroughbreds continued unbridled. “They are intelligent horses; they think for themselves, they are honest, and they take satisfaction in their achievements,” he enthuses. While he was still at school, Weinberger worked at a clinic near his riding association that specialised in treating racehorses. When it comes to his subsequent medical and sporting careers, the rest, as they say, is history. Today, he is a consultant for German thoroughbreds, oversees veterinary training for horse trainers and has been the veterinary representative of the German umbrella organisation Deutscher Galopp to the EHSLD, the international horse-racing body, since 2001.

The hospital’s two directors work with a team of around 50 staff, 13 of whom are veterinarians. For Dr Thomas Weinberger, each member is as important as the next. “A chain is only as strong as its weakest link,” he says, explaining his philosophy. “Anyone can criticise anything – even me – but they must have a good reason for doing so.” Another pillar of his approach is “diagnosis before therapy”. As the director explains, “for some horses, expensive treatments with sophisticated medical devices simply aren’t an option. In any case, customer needs to know what costs to expect. We never coax anyone into specific therapies.” At Burg Müggenhausen, this principle applies regardless of the patient’s potential financial value. The hospital’s clientele includes racehorses, sport horses and so-called leisure horses. “We are here to help all horses; we don’t put a price tag on horses”, explains Weinberger.

The staff at Burg Müggenhausen work to a three-shift rota. A team comprising a senior vet, an assistant vet, an anaesthetist and veterinary assistants cover each shift, while at least two veterinary assistants and one vet are on call around the clock, thus guaranteeing the clinic is manned and able to serve its patients at all times. Mobile services are reserved for race horses only. The clinic treats around 6,000 patients per year, performing between 500 and 600 operations. The primary focus is surgical procedures relating to the musculoskeletal system, followed by dental procedures, colic operations, and surgery to treat eye diseases and respiratory disorders.

Our services for you:

The hospital’s other facilities include a smithy, a riding hall, the stable wing including a separate unit for scintigraphy patients, a pharmacy housed in what was once the granary, and various laboratories. It also features outdoor areas and paddocks for patients, plus a racetrack used for endoscopies during exercise, among other purposes. Thomas Weinberger hits the nail on the head: “There aren’t many things we don’t have,” he says. The clinic’s outstanding international reputation more than bears this out.

Box stalls for mares with foals

For procedures on standing horses

For procedures on lying horses 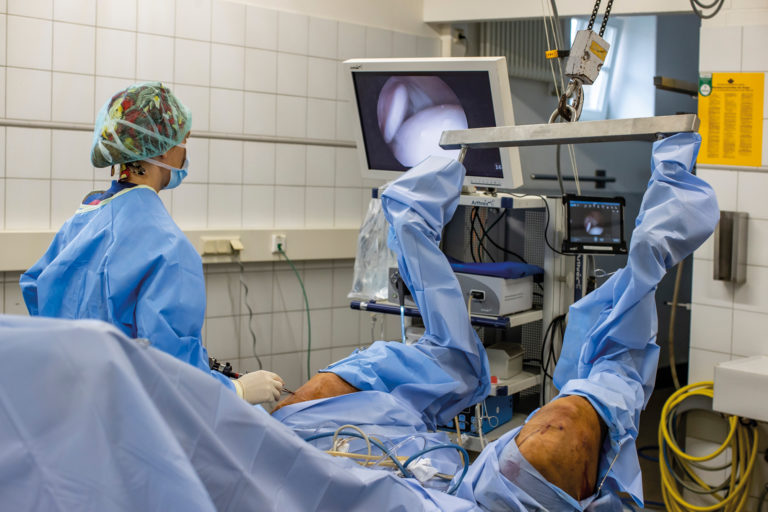 Equine soft tissue surgery primarily relates to abdominal/colic surgery and operations in the region of the urinary system, the sexual organs, and the upper and lower respiratory tracts, as well as operations on the skin.

Orthopaedic surgery is surgery on the musculoskeletal system of a horse. This includes operations relating to the bone skeleton, such as fracture fixation. It also includes endoscopic and arthroscopic procedures on joints, bursae and synovial sheaths, as well as operations on ligaments and tendons.

The field of orthopaedic diagnostics & therapy deals with musculoskeletal diseases and disorders, particularly relating to lameness.

Dentistry involves prophylactic examinations of teeth and the oral cavity as well as the diagnosis and treatment of dental diseases and associated diseases of the paranasal system.

The specialist field of internal medicine subsumes a number of subareas and deals with the diagnosis and treatment of diseases of the internal organs. These include diseases of the gastrointestinal tract, the respiratory system, the urinary system, the blood and blood-forming organs, the muscles, the nervous system and the skin, plus hormonal and metabolic disorders and all infectious diseases.

Cardiology is a separate specialty within the field of internal medicine and concerns the diagnosis and treatment of cardiovascular diseases and disorders, including cardiac arrhythmias, valve disorders, myocardial and pericardial disease and congenital cardiac malformations.

Intensive care and emergency medicine involves administering first aid in serious emergencies as well as providing care to and monitoring horses and foals with life-threatening illnesses. This also includes post-operative care to patients in need of intensive care.

The field of neonatology is concerned with the diagnosis and treatment of all diseases and disorders experienced by newborn foals. The fields of internal medicine, intensive care and emergency medicine also play a central role in such care.

Sports medicine entails the diagnosis and treatment of performance-related diseases and illnesses in sport horses and workhorses. Special dynamic examination methods are often used in this field, including performance tests, endoscopy during exercise, kinetic and kinematic gait analysis, and saddle pressure measurements.

The field of rehabilitation medicine is concentrated on recovery following surgical procedures, medical movement therapy to treat back pain and abnormal posture, and improving the quality of life of animals suffering from debilitating diseases such as arthritis or neurological impairments.

Ophthalmology deals with diseases and functional disorders of the eyes, their adnexa, and the optic nerve up to the visual cortex in the brain – the visual processing centre. Ophthalmologists also perform surgical procedures on eyes.

Reproductive medicine involves the diagnosis and treatment of diseases relating to the sexual organs and the udders as well as breeding suitability tests, assisted reproduction, pregnancy-related diagnostics and obstetrics.

The specialist field of anaesthesia is concerned with professionally sedating and anaesthetising horses and sparing them unnecessary pain. Thanks to state-of-the-art methods and gentle techniques, it is now possible to perform complicated surgical procedures and life-saving emergency operations on seriously injured or sick horses and to transport them safely.

Diagnostic imaging is the process of examining a horse using digital X-ray technology, ultrasound, computed tomography (CT), magnetic resonant imaging (MRI) and scintigraphy. Nowadays, many of these diagnostic techniques do not require general anaesthesia and can be performed on a standing horse.

Professional large-animal transport services safely transport seriously injured or diseased horses – such as horses with severe colic – to an equine hospital. Horses with complex fractures or severe neurological conditions can also be transported safely and with due care, either using a harness to alleviate the load on the fracture or by lying the animal on a mat. The same applies for transporting recumbent horses. Some largeanimal transport services also specialise in recovering horses from extreme situations, such as rescuing horses who have fallen using a winch, crane or helicopter.

Weighting of the specialist areas: range of services offered compared with the maximum service spectrum in the corresponding area.